After killing his father, a Northwoods man showed up at a friend's home, without a shirt or shoes, and admitted what he'd done before shooting himself dead, a relative told the Post-Dispatch. The son was found dead of a self-inflicted gunshot wound, two blocks from his parents' home, and a dozen hours after police discovered the body of his 59-year-old father, Dwight Hogans Sr. Police and relatives confirmed that the suspect is the son, Dwight Hogans Jr., 24. He lived with his parents at a home in the 3700 block of Colonial Avenue. The son called 911 after fatally shooting the father about 10:30 p.m. Wednesday. As Hogans Jr. was leaving, two Northwoods police officers pulled up in front of the home, at the corner of Colonial and Ascension avenues. Hogans Jr. got into a shootout with officers, police said., then he ran off. No officers were hit by gunfire. Hogans Jr. turned up dead a few blocks away the next morning. LaTonya Hogans said her cousin, the senior Hogans, had two sons, a daughter and 10 grandkids. "He was a good father and a damn good granddad," she said. "He wanted his kids to always be better than him." 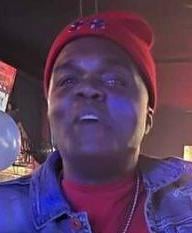